Mushroom Canoe Is Rooted In Nature

Mushrooms might be the most contested pizza topping after pineapple, but can you build a boat from pineapples? Probably not, but you can from mushrooms. Mushrooms, or rather their mycelium root systems, can be used for things like packaging, insulation, and furniture, and it could be the next thing in floatation, too. Just ask [Katy Ayers], a Nebraska college student who built an eight-foot canoe molded almost entirely of mycelium. 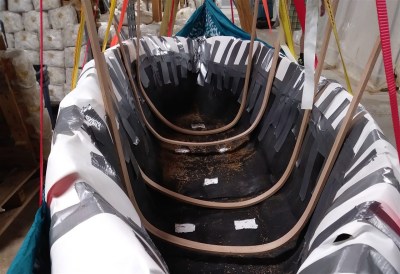 [Katy] got into mushrooms when she was tasked with researching solutions to climate change. She loves to fish and has always wanted a boat, so when she found out that mycelium are naturally buoyant and waterproof, she decided to try using it as a building material.

[Katy] floated the idea by the owner of a local mushroom company and they got to work, building a frame suspended in the air by a hammock-like structure. Then they covered the boat’s skeleton with spores and let it proliferate in a hot, humid growing room. Two weeks later, they had a boat made of live mycelium, which means that every time it goes out on the water, it spawns mushrooms. The total cost including tools was around $500. The boat experiment spawned even more mycelium projects. [Katy] has since experimented with making lawn chairs and landscaping bricks from mycelium.

Don’t want to wait to grow your own mycelium boat? You can build one out of stretch wrap, packing tape, and tree branches.